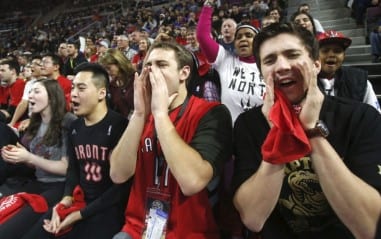 Sports fans who love their sports teams seem to be traveling more and more to see their teams play when they’re on the road. Frankly, this is not anything new. Fans who may have been relocated to a new city have always come out to support the teams they grew up with, many times wearing a jersey or hat of that team to show their allegiance. But in recent years, some stadiums have a fairly substantial amount of fans cheering on the visiting team.

Fans who love their sports teams enjoy seeing them play, even if it’s on the road. This is certainly not anything new. People who have been relocated to a new city, still enjoy coming out to support the team they grew up with. They are proud to wear the jersey or hat of that team to show their allegiance. But in recent years, some stadiums have a fairly substantial amount of fans cheering on the visiting team.

Much of that has to do with geography, only needing to go a short distance to see their team play. It may also be due to the availability and price of tickets in their home markets. Fans just want to see their team play and cheer them on, and there’s certainly nothing wrong with that. On the other hand, if the home team has available seats, there’s no reason they shouldn’t sell them to anyone who wants them. That’s the business they’re in.

Fans of the visiting team will cheer when something good happens, or boo when they feel inclined. But due to the overwhelming amount of fans cheering on the home team, they are typically not noticed. Well, unless you happen to be sitting close to them.

But some of that is changing. The city of Toronto is a little less than a 4 hour drive from downtown Detroit. When their basketball team, the Raptors, play the Detroit Pistons, it’s hard not to notice that a good percentage of the crowd is cheering for Toronto. The Raptors have been a good team for awhile, and tickets are tougher to get for home games. So they hit the road and head for Detroit, where seats are available.

The Toronto Maple Leafs are another team that sees their fans make a difference on the road. With the city of Buffalo less than a 2 hour drive, Leafs fans make the trip to Buffalo to watch their team play the Sabres. Leaf fans also show a strong presence way down in Nashville, when their team plays the Predators.

Add the Green Bay Packers to the list of teams whose fans travel fervently to watch their team play on the road. The “Cheeseheads” make their presence felt in whatever stadium they are in.  Also, Chicago Bears fans are no strangers when their team is playing on the road, especially in places like Detroit or Cleveland.

So does this pattern actually affect the home field advantage for the home team? Well, that’s debatable. If anything, it can be a little embarrassing, not just for the team, but the home fans as well. Granted, it probably does give a boost to the road team, knowing their fan base supports them not just at home, but also on the road.

But much of home field advantage is being at home. Not just on the court but off it. Being able to see your family, sleep in your own bed and drive your car to the game are all positives. The surroundings are familiar, and you know that at the very least, a good portion of the crowd is behind you.

It will be interesting to see if this trend continues, or if it’s primarily because of ticket availability and how well their team does on the field or court.